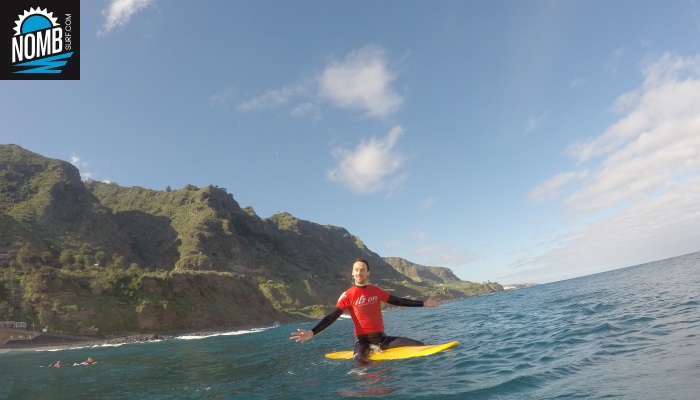 .. what a surfholiday!! Great waves and uncrowded lineups in breathtaking surroundings.

Did you know that the Canary Island of Tenerife is practically one big volcano?? The Teide, with over 3.600m, is the highest peak of Spain. It´s top is often covered by clouds but it´s walls basically coneshape the island. It doesn´t get much better than surf great waves and be surrounded by stunning countryside and beaches, does it?? NOMB Surfer Michi was clearly frothing over the incredible lush cliffs around.

But let´s begin with telling you a little bit more about TENERIFE TAKE-OFF. The NOMB Surf headquarters on Tenerife were located right up on the hill, underneath the Teide, in nearly 1.000m altitude. A beautiful oceanview included of coures. The crew was lucky, it was nearly all private rooms this trip, each room equipped with a private bathroom. TENERIFE TAKE-OFF also saw the first ever surfing couple on a NOMB Surftrip: A.K. and Michi! It worked out great for everyone, we hope to welcome more fun couples like this one in the future!

Being located so high up, sure, it was a little bit chilly at the house but the lush garden of our rural homestay, the woodfire oven, the pool and the sauna (in daily use) made up for the little chill outside. Check out our pool!! 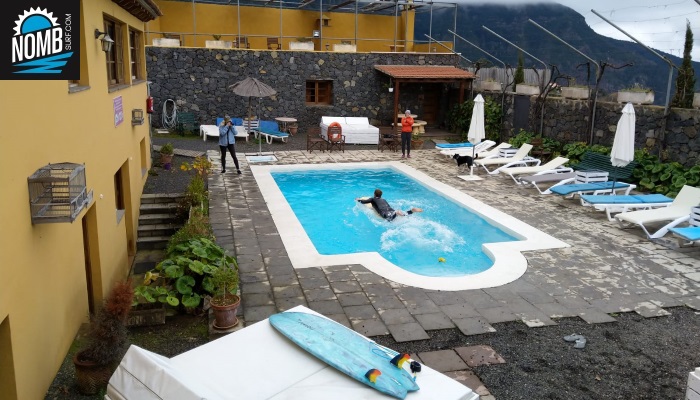 What you don´t know is that we lasted only about 2min in the pool 😉 The water was freeeeezing. Surfheadcoach Angie and NOMB Surfer Chris wanted to take advantage of the pool and do some duckdive training. They got changed into their wetsuits, got the boards ready and ufffff, so freezing cold. Duckdive training was called off but the pool fun continued.

The not too sucessfull practical duckdive trainig was part of the daily surftheory sessions. Either after breakfast, before heading to the beach or snuggeled up next to the fireplace at the end of the day. Our NOMB Surfers learned a lot about ocean awareness, the beach environment, the formation of swell and waves. They also learned how to correct themselves through photo and video analysis. A strong and great tool to improve. Often our perception of what we are doing is totally different from reality.

Our surftrips are designed for our participants to improve quickly and efficient. Theoretical and mental training out of the water are as important as the correction of chains of movements and direct coaching in the water. Always depending on the local conditions and the needs of the group headcoach Angie and local instructor Emilio decided on their daily strategy. We always have a local surfcoach on our trips. Not only for showing us the best spots at the right time but also to help in the water. Emilio made sure everyone knew the dynamics of the surfspots, entered and left the water in safety, found their spot in the lineup, got loads of waves and had a great laugh. What a legend! Thanks for being part of TENERIFFE TAKE-OFF. That´s Emilio, the NOMB Surfcrew and campchef Lovely Linda. 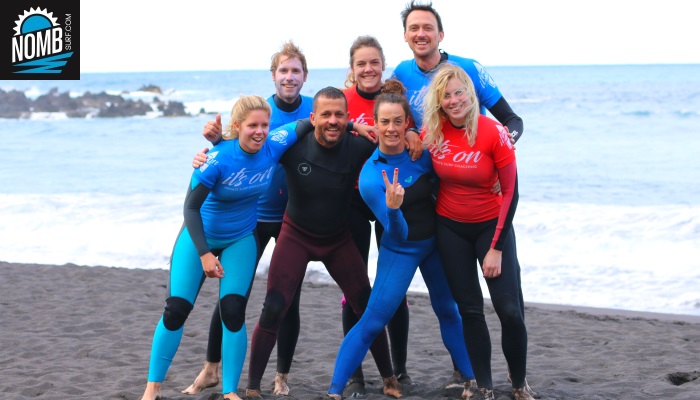 Happy faces in and outside the water. Apart from surfing a lot the crew got up to quite some cool stuff. Beach yoga for example, to stretch and relaxed those worked muscles. We were lucky to count on sweet Noella, a great yoga instructor and a surfer herself. Noella focused on creating more strength in the core area, stretching the tired muscles in the neck and shoulder areas and also on the essential breathing. Great classes down at the beach, listening to the sound of the breaking waves. Even yoga novice Michi started to like this thing called yoga 😉

The surfcrew also got to explore a bit of the local culture of Tenerife. Surfguide Emilio took the crew out for dinner one night, to a typical restaurant. They are called Guachinches and can be found all over the island but mainly in the North. It´s a different type of restaurant where you are served local dishes and homemade wine. The food is delicious although not isn´t particular healthy (french fries mixed with fried eggs and chorizo sausages for example) but it was great night and the local food and wine restored the batteries of our surfcrew.

Part of the crew set off to explore Spain´s highest peak and the breathtaking view at the ´mar de nubes´ (ocean of clouds). That´s Lindis and Luzia casually posing in front of the Teide 😉 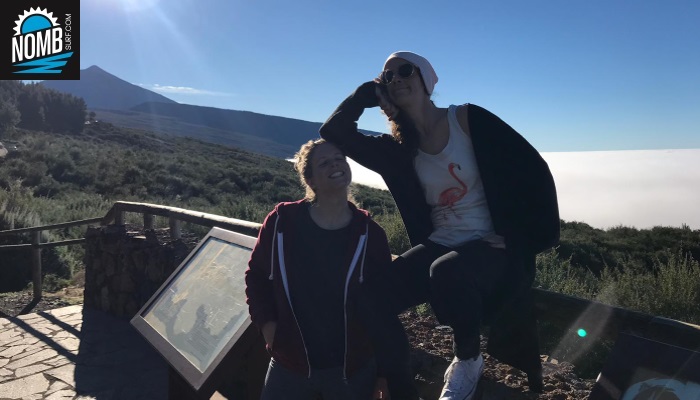 Unfortunately, shorty after this photo was taken, someone broke into our car and stole a couple of backpacks. An ugly setback, sadly something common to be found in pretty much any touristy spot worldwide. Luckily the stolen backpacks contained ´only´ beachstuff, (well, and Chris´s glasses) but no wallets or phones were robbed. However, the crew had to make their way to the local policestation to report the incident. Angie took over the cooking duties that night, a warm house and dinner ready were waiting for the crew upon return to the homebase. So proud that the spirits where kept high, what a crew of legends!!

As usual, the 7 days ran by way too quickly and after one last surfsession and an afternoon chilling on the beach TENERIFE TAKE-OFF was nearly over. One last tasty dinner, a few drinks and loads of laughter next to the fireplace. Check out the #Tripnotes photos on our Facebook page to find out even more about this fantastic trip (soon to be repeated for sure!!) to Tenerife!

Thanks to all the NOMB Surfers: A.K., Chris, Luzia, Michi and Miri for surfing with us!! Thanks to campchef Lindis for spoiling us and being the crazy woman she is! Thanks to local guide Emilio Slater for welcoming us and showing off with the best ever expressions, you deserve a book (´Luzia, this is a surfing class not a diving class, don´t go looking for fishes..´ Emilio to Luzia after a head first wipeout).

It´s been a great trip, we can´t wait for more and hope to sea you all soon on one of our upcoming trips.

← Prev: How to get free surfcoaching advise Next: NOMB Surftrip Series #3 - Panama aka. Paradise → 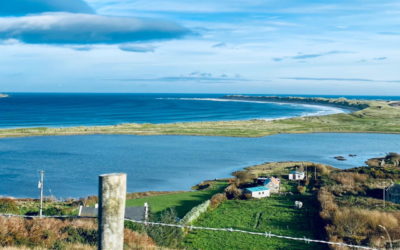 For the fifth time our surfteam set off to enjoy a surfholiday week on the Northwest Coast of Ireland. And just in... 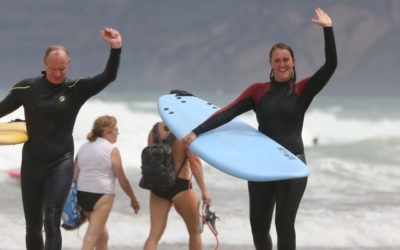 The Canary Island of Lanzarote showed us all her amor during our sneaky surfescape #LanzaroteLove. Daily sunshine is... 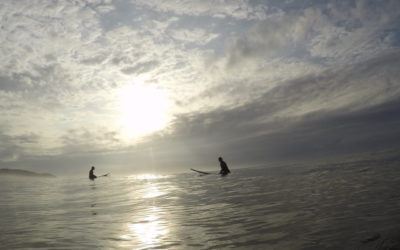 As you maybe know by now, we don´t only coach private surfcoachings on our homebase island Fuerteventura but we also...