Teaching your partner how to surf – a self reflection Aloha. My name is Angie, I am 39 years old and I am a surfer. Unfortunately I didn´t grow up next the ocean and I only started surfing when I was already grown up. It´s like with everything, the older you get, the harder it gets to learn new things, isn´t it?

I started surfing at a little beach in Chile years ago. Everyone around me living on that beach surfed, so I thought why not. I started with bodyboarding, mainly because I was totally unfit after having  studied and lived (well, trying to survive) in London. Bodyboarding seemed a lot easier to me than surfing, plus I met real cool people of the next town who bodyboarded, too.

My boyfriend at that time was a professional surfer, having surfed his whole life, completely living the surfing lifestyle. He accepted my decision to bodyboard but kept asking me to try surfing. So I eventually gave in. And yeah, that moment changed my life forever. How much cooler is it to go down the wave standing up? No offence to you bodyboarders out there, you have all my respect, but standing up on the board is just another feeling.

I was lucky that my boyfriend, apart from being a great surfer, also was a qualified surf instructor. Lucky? Well that´s what I though at least. First day surfing he tought me some basics, the 1-2-3- popup and how to not kill myself with my surfboard. I would be lying to say that I was a natural talent but I kept saying to myself that if everyone around me can do it, surely I can do it as well.

So here I was, hooked on surfing, being happy to have someone experienced next to me who can teach me. And this is where things went wrong. For my second surfsession we went down south to camp out, right in front of one of Chile´s endless left pointbreaks. No mercy for me, I was supposed to follow everyone climbing over the rocks with my big ass board and jumping straight into the line-up. Obviously I had no idea whatsoever, missed the lull in between sets and a second after I jumped I was facing a wall of water the size of a skyscraper. I didn´t physically die that day but in my mind I did, quite a few times. Needless to say that I didn´t catch any wave but only got tossed around by the ocean like a little rubber ball.

When I eventually left the water I was super proud of myself. I survived, didn´t hurt anyone and didn´t even break my board. I felt like I could take on the world. Until I saw my than boyfriend, coming out of the water, looking rather pissed off. And hell was he pissed off with me. Why I didn´t stand up? Why I didn´t wait for the break in between the sets? Why, why, why..

And that´s what it would be like the next couple of years. He really made an effort, he wanted me to learn real fast so I could catch the good waves, instead of hanging around in the whitewash or waiting for the leftovers. The more he pressured me, the more I got frustrated and eventually fully blocked myself. I even thought about giving up on surfing. Until one day, I started talking to an Australian couple staying at my hostel. He was a really experienced bodyboarder, she hardly would put her foot into the ocean. I asked her if she ever tried to bodyboard and if he ever offered to teach her and she burst out laughing. No way, she said. There is no way in the world my boyfriend will teach me how to bodyboard. Why, I asked. She replied by saying: look, it´s like if you try to teach your boyfriend how to cook or learn a language that you already know. You automatically put yourself in a superior position only by knowing what you teach.. This can´t work in a realtionship!

That same day I promised myself to only surf by myself in the future. Without anyone (him) watching me, without anyone giving me tips, simply no pressure. That day, I actually started to really enjoy surfing. And once in a sudden I improved. And made great surfing friendships along the way. That´s me with the girls shredding our homebreak on our tankers. Now, years later, I am still surfing. The funny thing is that teaching how to surf now is not only my hobbie but also my profession. And now, many years after that frustrating second surfsession I find myself in a reverse situation: I am trying to teach by now boyfriend how to surf. Well, have a guess. It doesn´t work!!

Even though I am an experienced surfcoach and I am used to adopt to any type of personality of my students, all my knowledge, drills and motivational skills, they don´t work with my boyfriend. Yes, I want him to improve real quick. Why? So he can catch the good waves out there with me, instead of hanging around in the whitewash or waiting for leftovers. Sounds familiar, right? But I wanted him to learn the correct way, learning how to read and understand the ocean. Something that noone ever tought me but I had to figure out for myself. Surprise, I was wrong.

The difference between my boyfriend and my younger self is that he is a.physically fit b.has no fear and c.is a little bit crazy for adrenaline. So instead of getting frustrated about his surfing skills he got more frustrated with me for not letting him surf the big powerful waves. So why won´t you let him, you ask? Being a surfcoach I always think I have seen pretty much everything (I still get surprised now and again) in the water and I have also seen some nasty accidents. The reasons for those accidents were mainly lack of boardhandling, lack of surfetiquette knowledge, lack of skills. Obviously I want my boyfriend to not hurt himself, but I also don´t want him to hurt anyone else. That´s why I held back, drilled the surfing rules into his brain and couldn´t stop myself from giving him lectures in the water.

Was I aware of what I am doing? Not really, no. I figured that it might be hard to coach him but I didn´t realize how much I was also holding him back. Until one day in March this year when we went to Morocco. We stayed in front of this amazing and easy to surf pointbreak, pealing in like there was no tomorrow. The line-up was crowded as and I kept telling him to watch out, to respect the rules, to do this and that. Resulting in a very low wavecount for him. And than he freaked out. Not into my face but I could see it in his eyes. He had enough. That moment brought me back to the conversation with the Australian couple years ago. And it drew on me like a lightning. I quickly paddled away and left him totally by himself. Well, I still kept an eye on him from the distance but he didn´t know 😉 . Once in a sudden I saw him surfing this crazy wave, nicely going along the face of the wave and I knew that things had changed. For both of us. Today he surfs so much better than ever before, with a flow and a feeling for the water that I could have not explained him in a 100 years. He really enjoys surfing and is improving super quickly. I feel like an idiot, having done exactly what slowed me down all those years ago and today I limit my advice to only when he asks for it. (At least I try very hard).

The end of the story is, don´t try to teach your boyfriend/girlfriend how to surf, it (generally) won´t work. Surfing is a sport that requires so much more than chains of movement. What makes a good surfer is the connection to the ocean, and this feeling noone can teach you. Probably not even your partner 😉

I am off surfing, have a great day and good waves for you.

← Prev: 5 reasons why you should never join a NOMB Surftrip Next: Meet the team: Christian ´Greghu´ Sidler → 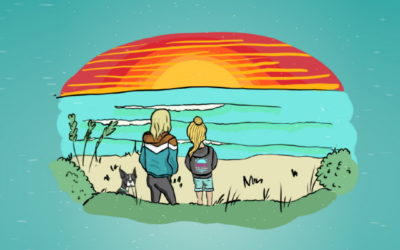 Let`s write a book! That`s how it all started. Surf coach Angie and camp chef Miris were sitting at a beach in Galicia... 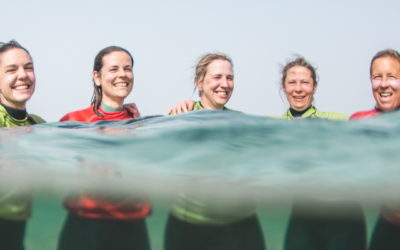 #Tripnotes FUERTE FUERZA: all the ladies in the house

#FuerteFuerza has been a special type of NOMB Surftrip. While our other trips are designed to either surf as much as... 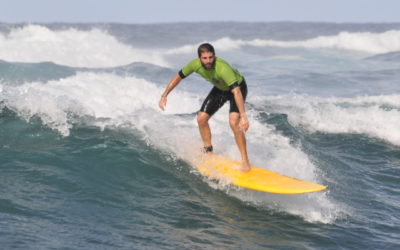 Get ready for a defiant week of intensive surfcoaching on our homebase island Fuerteventura. We decided to combine our...